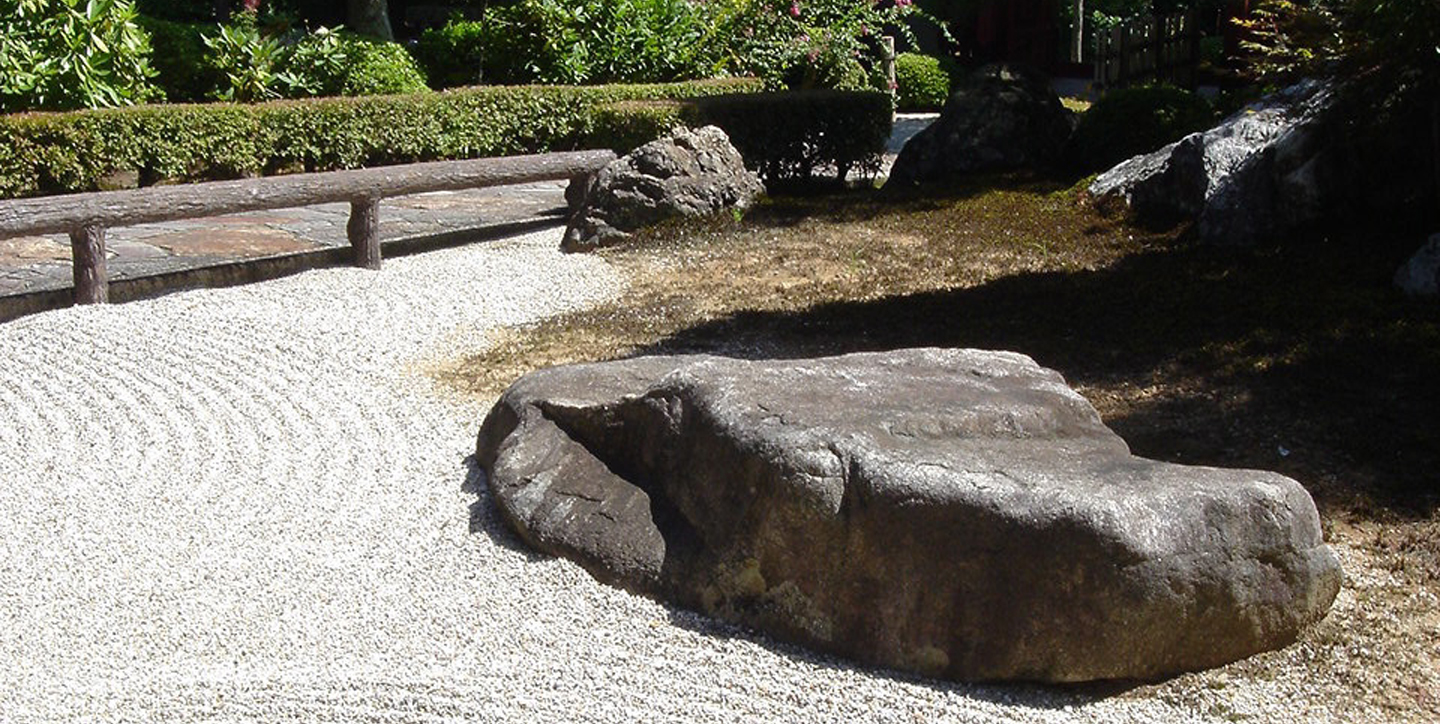 Seki and its Traditions

Seki, the birthplace of KAI, is the center of the cutlery industry in Japan. Located in the northern Mino region, today it has over 600 companies involved in the production of knives, representing about 40% of the companies in the city. Its history can be traced back to the 13th century, when feudal rule was being established in Japan.

According to legend, a master sword-maker by the name of Motoshige discovered in the region ideal conditions for tempering steel: high-quality ore and pine charcoal as well as an abundance of pure water. Over the centuries since then the master sword-makers of Seki have vied with one another for the honor of producing swords so perfect that they would bear comparison with works of art.

Subsequently, as the age of feudal warlords came to an end, they made themselves over into blacksmiths to produce blades suitable for domestic and agricultural use.

In the second half of the 19th century western knives and scissors were introduced to Japan and the people of Seki embarked upon the development of new types of products for new markets. It was precisely at this time that the factory which would later become KAI was founded. 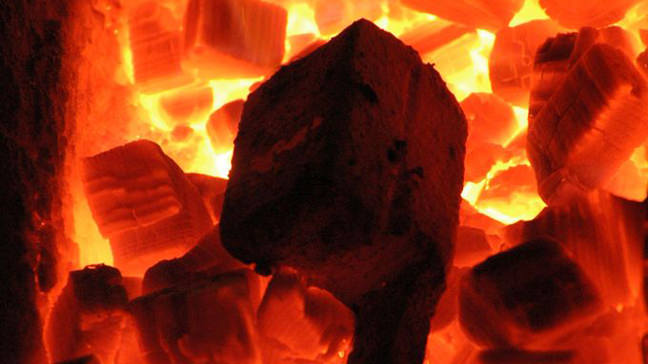 Swordsmithery in Seki: Mind over Matter

From the 13th century when the legendary founder and pioneer Motoshige first began making swords in Seki, they were much appreciated throughout Japan. Warlords praised them highly, as we may gather from the old saying: "They neither break nor bend and cut marvelously well."

Down through the ages the craftsmen of Seki remained faithful to the secrets of their ancestral art as well as to the Buddhist teaching of Hajya Kensho, which translated literally means: "Smash vice and iniquity, and restore light to righteousness." Clad in their white robes to keep themselves free from defilement, these men forged blades in a spirit of inner emptiness, a characteristic goal of Buddhist spirituality which may explain why so many master sword-makers went on to become famous performers of No and of Kyogen, the comical counterpart of No.

Even today the swordsmiths of Seki carry on this 700-year tradition. Some of them say that the flame is the most important element in producing a blade. They say that its color or appearance teaches them everything they need to know, from the state of the steel to the precise moment when the bellows must be brought into play. The flame is their master and friend, and through it they remain in touch with the spirit and art of their predecessors.

1. Tatara Steel: A mixture of iron filings and charcoal is heated to produce a solid amalgam. Only the part of the steel called tamahagane will be used in making the sword.

2. Tsumiwakashi: The tamahagane is heated and forged into a flat shape 3 to 6 millimeters thick. It is then broken into small pieces in order to test its hardness. These pieces are melted down separately according to their hardness at 1,300 degrees and made into a single slab of steel. By wrapping this slab in dampened paper, then covering it with mud and ash, the heat is transmitted evenly on the surface as well as inside.

3. Orikaeshi Tanren: The steel heated to 1,200 to 1,300 degrees is repeatedly hit with a large mallet and folded over. During this process, the impurities in the steel are worked out and fly off as sparks.

4. Katame (Tsukurikomi): Pieces of steel of various degrees of hardness are combined. A special characteristic of the Seki tradition is a production method called shihouzume that involves packing from four directions.

5. Sunobe: The hardened steel is heated and stretched into the form of blade by hitting with a small hammer.

6. Hizukuri: The stretched steel is heated again and hammered so as to form the cutting edge and the blunt edge of the blade.

7. Arashiage: A rasp is used to smooth out any roughness on the blade.

8. Tsuchioki and Tsuchitori: The blade is then coated with a mixture of clay and pine charcoal which will leave a wave-like pattern on the cutting edge.

9. Yakiire: After the entire blade is evenly heated, it is plunged into water. The portion of the blade that was thinly coated with the baking clay will heat up to a higher temperature and so will be more strongly tempered.

10. Aratogi (Kaji-oshi): Once the tempering process is finished, the swordsmith himself does some preliminary grinding to test the quality of the blade. Then he works on the part that will be inserted into the haft of the sword before passing it on to the grinder.

Honminoshi, a 1,300 Year Tradition Sustained by Nature and Craftsmanship 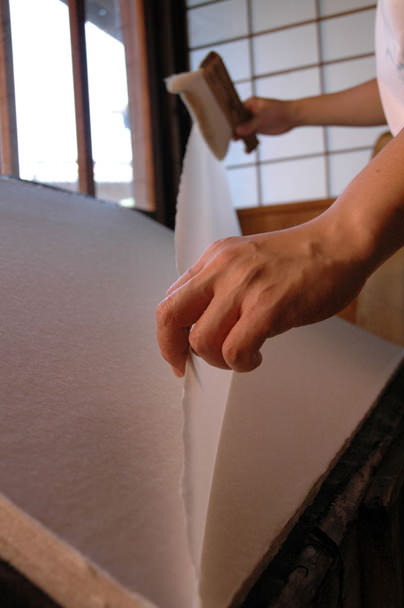 The Japanese paper produced in the Mino region has been prized for its high quality since ancient times. Not only does the name Honminoshi appear in the early 8th Century as a Japanese handmade paper used for copying Buddhist sutras, but many of the oldest Japanese family registers preserved in the Shosoin in Nara are known to have been written on paper produced in the Mino region. After more than 1,300 years, Honminoshi continues to be handmade by skilled craftsmen who use no chemical dyes. The production process for Honminoshi begins with soaking the white bark of the natural paper mulberry (kozo) overnight or even for two nights in a trough of pure water to bleach it and remove the non-cellulose material. After drying it in the sun, it is boiled in a large pot filled with pure water in order to continue the bleaching and to eliminate any acridness. This process is repeated until all defects in the bark are removed. The substance that is obtained through this process is then broken up into into fibers about 5 to 10 millimeters long, which are mixed with a mucilage made from sunset hibiscus and passed through a large screen. Whereas ordinary paper is usually only screened in a single direction from top to bottom, Honminoshi goes through a screening process that twines both vertical and horizontal fibers to bring out its uniquely beautiful and delicate quality. After pressure is applied, the paper is again dried in the sun to obtain the final completed sheet of Honminoshi. In this way natural ingredients, in alliance with water, air, sunlight, are brought together by skilled craftsmen to produce the truly beautiful quality of Honminoshi.

Cormorant Fishing, a Tradition Protected by the Court and the State

The Nagara River, one of Japan's best protected rivers, extends for some 160 kilometers. Seki is located about midway downstream and has historically been associated with the age-old tradition of ukai, or cormorant fishing. In this traditional method of fishing, practiced at night from mid-May to mid-October, a usho or master cormorant fisherman uses 8 to 10 cormorants to catch fresh water trout, a sweet-smelling and tasty fish that feeds only on algae. Because these trout are extremely sensitive to light and sound, the usho first stirs them up by hitting the side of his boat and shining his torch on the black surface of the river, then releases the cormorants to snatch them out of the water. The beauty of cormorants swooping down in the stillness of the night, their unique cries, hoa hoa, and the swift expert movements of the cormorant fisherman, make for a typical and fascinating summer night scene on the Nagara river.

The technique of cormorant fishing has always been protected by the court and the state. In the past government officials especially designated by the court would go fishing in performance of some ritual or just for the fun of it. It is no accident that the Japanese ideogram for fresh water trout combines the character for fish with the character for divination. According to legend, on the eve of a battle to unify her country the 4th century empress Shinkô took one piece of thread from the robe she was wearing and made the following wish: "If I can win the battle, let me catch a fish with this thread." She is said to have caught a fresh water trout.....

The present day ushô wears a black robe, a kazaori eboshi (a hat with bent brim) and a mino (a skirt of straw) that date back to the Heian Period (794-1192). The skills and secrets of cormorant fishing on the Nagara River are painstakingly handed down from father to son, ensuring that this noble tradition lives on in future generations.